If one is paying attention to the rhetorical winds that are blowing out of the climate change camp it is not hard to predict the impending storm. The narrative has been written and the minions of misinformation are singing from the same sheet of music. Climate deniers must be punished. 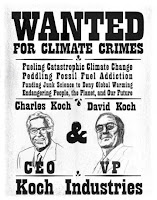 Seventeen attorneys general from various U.S. states and territories — 16 Democrats and 1 independent — have begun an Inquisition against climate deniers. New York Attorney General Eric Schneiderman said, “The bottom line is simple: Climate change is real.” He went on to say that if companies are denying climate change these AGs will “pursue them to the fullest extent of the law.”

Climate alarmist Michael Kraft from the University of Wisconsin-Green Bay drew a parallel between climate deniers and the tobacco industry. He notes that some in Congress have asked the Justice Department to pursue prosecution of oil companies under racketeering laws. Attorney General Loretta Lynch has said she’s referred the matter to the FBI. Just like the Obama administration has crippled the coal industry, they aim to do the same to the oil industry. The result would be devastating to everyone on the planet.

These climate alarmist vilify anyone even remotely associated with the oil and gas industry as if being a proponent of energy is somehow a sin. They’ve establish dubious links almost to the point that anyone who’s ever filled up their car at an Exxon station is in the back pocket of Big Oil.

Nary a word is ever mentioned about the billions of dollar flowing to and from the green energy sector to scientists and advocates who literally have a vested interest in killing Big Oil and propping up Big Green.

Skeptics like me are not against alternative energy sources. We’re just not willing to ditch the plentiful resources that run our economy based on some fantasy that we’re destroying the planet. We aren’t. So-called fossil fuels are as abundant as they’ve ever been. That’s one of the reasons why gas prices have remained relatively low. To abandon cheap energy for other sources that can’t possibly meet our needs is economic suicide.

I don’t profess to be an expert on climate science. I will say, though, that I have exactly the same number of climate science degrees as Al Gore. What I am is an objective observer of facts. After years of research and an award-winning documentary on the subject, I have not seen any evidence to support the theory that what we’re doing as humans is causing catastrophic global warming. Nor am I buying into the notion that human activity is causing weather disasters like droughts, floods, and hurricanes. In fact, we’re in the longest period without a major hurricane hitting the United States since the Civil War.

None of what the doomsayers are predicting is coming true. Polar bears aren’t dying off. Hurricanes are not more severe nor are they more frequent. In fact, the opposite is true. There aren’t more floods or droughts than usual, and sea levels are not rising as predicted. The truth is the sea levels on the East Coast of the United States have actually fallen over the last six years. The vast majority of small islands in the Pacific and Indian Oceans are growing, not getting swallowed up by the sea.

It’s as if the climate hysterics can make it so by raising the volume of their voices, despite the fact that the evidence is piling up against them. Their goal is to shut down anyone who disagrees and we cannot let that happen.