Have you ever watched one of those soap operas where a woman is married to this guy but she never really loved him and she’s had a thing for the next-door-neighbor who mows the grass with his shirt off? Then the husband gets tied up in his work and she feels neglected and the next thing you know she’s in the sack with the lawn-mowing neighbor. The husband walks in and finds them together and she wants a divorce but her husband won’t give her one so she just runs off with the neighbor.

That, in a nutshell, is the Ukraine/Crimea/Russia love triangle.

This has been a complicated relationship from the beginning and Crimea’s relationship with Ukraine has been shaky at best. Many people look at Crimea as a part of Ukraine like we
look at Kansas as a part of the United States but it’s not like that at all. Even before the fall of the Soviet Union, Crimea considered itself autonomous. In fact, after the fall, Crimea’s official name was, and is, the Autonomous Republic of Crimea. They are made up of nearly 60 percent Russian ethnics, about 25 percent Ukrainians and the rest Crimean Tatars, who are Sunni Muslims. 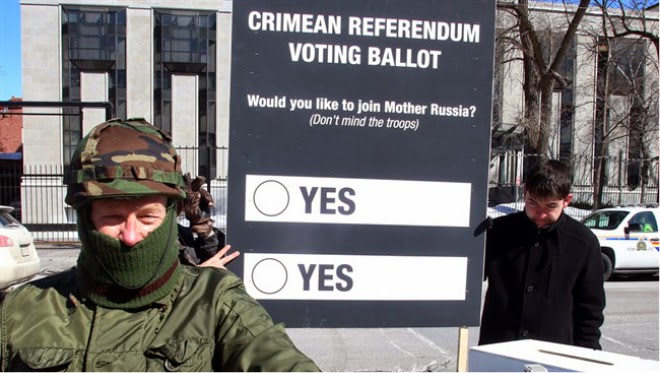 From Russia’s standpoint, Ukraine ceased to be a legitimate country when they overthrew Viktor Yanukovych in February. Yanukovych had been elected president in 2010 and was deposed in a coup. Russia, which has always felt like Crimea was more a part of Russia than Ukraine, moved to either protect Crimea or take advantage of the situation, depending on how you look at it. But there’s no denying that the Autonomous Republic of Crimea voted overwhelmingly to become a part of Russia.

This is the part that’s confounding to those of us who have watched President Obama foment an Arab Spring in the Middle East. One by one, the countries of the Middle East were encouraged and aided by the United States in shucking their governments in exchange for free elections. It seems Crimea has done just that and now we’re all bent out of shape over it.

I guess unless you’re installing the terrorists of the Muslim Brotherhood this administration doesn’t recognize your referendum.

The divorce of Crimea and Ukraine has been a long time coming and it was inevitable that she would run to the waiting arms of Russia. How this is any concern to the United States is beyond me. There are some conflicts around the world into which we could possibly insert ourselves and make it make sense but we have absolutely no interest in this squabble.

The president is talking about arming Ukraine so they can take Crimea back. Crimea doesn’t want to come back. Didn’t we learn this lesson in Vietnam? You can’t force people to fight a war they have no interest in fighting. In fact, this situation is even worse. Crimea would surely fight to stay with Russia.

The American people are not the least bit interested in getting involved in this whole mess. Putin, of all people, understands this. Obama continues to make veiled threats that everyone knows are hollow. Stop it, already. Crimea is joining Russia. The American people don’t give a rat’s rump and there will be no U.S. military intervention to stop it.

This is just a diversion from more important issues like the IRS harassment of those who oppose the president politically, the NSA spying on its own citizens and activist federal judges overturning the will of the states.

Ironically, we’re more afraid of the United States government than Putin is.