Michelle, stay out of our school lunchrooms

Michelle and Barack Obama have issued an edict to public schools to ban ads for junk food and soft drinks in schools. Now, I think it’s probably a bad idea to be pushing junk food in schools but this is not the Obamas’ call. In fact, it’s not the call of anybody in the federal government.

Schools are run by the states and the counties or cities. They have school boards that are elected and accountable to the people. If anyone is going to ban ads of any kind in schools 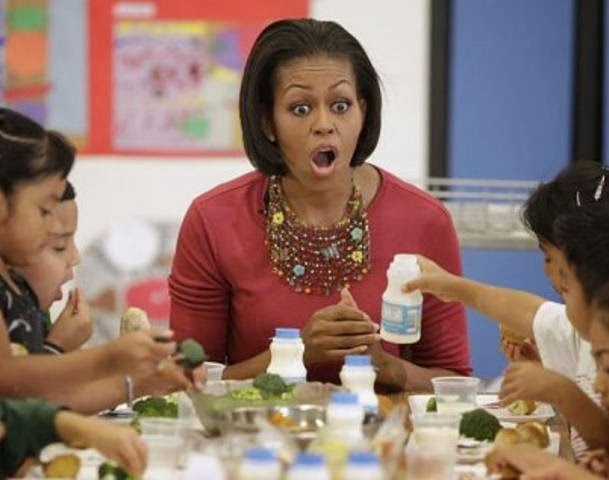 it’ll be them. But the Obamas think it’s their place to do this. I’m waiting for a governor somewhere to stand up and put these federal officials in their place. So far, I haven’t seen one.

But this didn’t start with the Obamas. I’m not sure where it started. George W. Bush had his No Child Left Behind program that dictate standards to school. Like the Obama initiative, it was well-meaning but it was wrong. The federal government has no business getting involved.

It started out innocent enough. It was supposed to be a clearinghouse for great ideas. In other words, they were supposed to monitor what was working in one state and share it with the others. Eventually, though, it did what any government agency does. It took on a life of its own. Now it is a huge behemoth that grows each day in its audacity. To put it another way, and a way Michelle Obama might understand, it’s a bully. The Department of Education is bullying states and local districts. It’s telling them too often what to teach and it’s telling them what to feed their kids.

The short answer is it won’t. Not as long as nobody is willing to stand up to these bullies. And what’s this obsession with our health and our weight anyway? I mean, did anybody on the right tell Michelle not to get her hair cut like Moe Howard? (Boy, I’m glad she dropped that hairstyle) No! It’s her hair. Why do they care if people are fat or not exercising or eating donuts or drinking too much or smoking too much?

Why? Because they’re liberals and that’s what liberals do. It’s not about live and let live. It’s about live and tell everyone else how to live. Think about it. Whether it’s the environment or gays or anything else they feel compelled to tell you how to live your life.

It’s time states start pushing back. The reason the federal government has gotten away with this intrusion for so long is because the states have allowed them to. That has to stop.

Posted by Phil Valentine at 2:02 PM

Email ThisBlogThis!Share to TwitterShare to FacebookShare to Pinterest
Labels: Department of Education, Michelle Obama, No Child Left Behind, public schools