I am such a big fan of God’s sense of humor, especially when it comes to the issue of global warming. You may have heard of the Gore Effect. That’s when temperatures are unusually cold when Gore flies in (on a carbon-polluting private jet, no less) to lecture those assembled on the dangers of global warming.

The Copenhagen Climate Conference in December of 2009 saw frigid temperatures and a blizzard, the first December Copenhagen snowfall in 14 years. The conference in Cancun 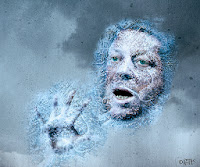 the following year saw three days of record low temperatures. God must get a big kick out of such irony. I know I do.

The latest irony is a Russian expedition to Antarctica. It’s summer in the Southern Hemisphere and the team was all set to make headlines about the discovery of record low sea ice. That’s when they got stuck in the frozen waters of the Antarctic. A Russian icebreaker was dispatched to rescue them.

This isn’t the first time that’s happened. A similar fate befell an Arctic expedition some time back, again, trying to demonstrate the lack of sea ice. Al Gore told us the Arctic Sea would be ice-free by the summer of 2013. The fact is Arctic summer sea ice saw a 55 percent increase over a year ago. Once again, Gore was completely wrong.

Meanwhile, back in the states, Green Bay set a new record low this week of minus 19 degrees. Record lows were shattered all over the Wisconsin area. To be clear, weather is not climate but each time we hit record highs or there’s unusually low sea ice the climate hysterics try to convince you it is.

That’s the frustrating dishonesty of the global warming alarmists. They twist and distort data to fit their agenda then insist that anyone who disagrees prove them wrong. That’s not the way science works. The burden of proof is on the one who comes up with the theory. Otherwise all sorts of outlandish claims could be sold to the public as gospel if the burden of proof were only on those who dispute the claim.

Once upon a time the conventional wisdom was the world was flat. That bogus theory was so widely sold and believed that few even thought to question it.  Contrary to some history books, most European’s of Columbus’ day had already come to the conclusion the earth wasn’t flat long before Columbus sailed. Still, there was a long period of time in which ordinary citizens took the word of the flat earth theorists without question.

The theory of global warming will die a death of a thousand cuts. The evidence keeps piling up against it. It will officially collapse under its own weight and people will wonder how anyone could ever have been so gullible.