I was reading a piece in The Tennessean newspaper that “artists” were twice as likely not to have health insurance as the rest of us.  I rolled my eyes. I’ve known a few of these “artists.” They’re somehow not too proud to take a handout but much to proud to take a job.

I also learned from a caller to my radio show that the city of Nashville offers subsidized housing for these so-called “artists” so they can continue to work on their “art” while they wait for their government checks. I was reminded of what Nancy Pelosi said during the Obamacare debate way back when. 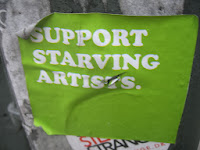 “We see it as an entrepreneurial bill,” Pelosi said of Obamacare, “a bill that says to someone, if you want to be creative and be a musician or whatever, you can leave your work, focus on your talent, your skill, your passion, your aspirations because you will have health care.”
In other words, let’s encourage people to be irresponsible. I arrived in Nashville, Tennessee back in the ‘80s, as many young folks do, all starry-eyed and eager to make it in the music business. Fortunately, or unfortunately, the radio business took off for me and I ditched my dreams of being the next big thing.
Art is a relative term. What some call art others call trash, whether it be paintings, dance, music or filmmaking. I would love to make films full time but I’m not going to quit my day job to do it. At least not yet. People like Nancy Pelosi think that’s unfair. I call it being responsible. I have a wife and kids to consider.
Let me be honest. Twice as many artists are without health insurance because they’re bums. I know that sounds harsh but it’s the truth. Somehow somewhere along the way they were convinced that it was their god-given right to sponge off the rest of us in order to allow them
the freedom to chase their dream. I’m, quite frankly, offended by the notion that there are people who value their dreams more than their responsibility. Nothing wrong with dreams. I have a few of my own but pursue them when you’re financially able. Just because you want to be an “artiste” doesn’t mean I have to subsidize it.  Or, at least, it used not to mean that. I guess now in this post-Pelosi world it does.
A good 98 percent of those trying to be an artist will fail and there’s a reason for that. A good 98 percent of that 98 percent are fooling themselves into believing they really have talent. Or maybe they’re listening to folks like Nancy Pelosi.
I’ve got news for the dreamers. Everybody has a secret dream. Everyone has this deep secret of being someone or something else. It’s perfectly natural. It’s perfectly healthy. Some of us will break out of our mold and become that new person we always knew we could be. Most of us won’t. There’s no shame in either. The only difference is in how we go about it. There are more important things than self-servingly chasing a dream. If you have a family you’re obligated to them first. Even if you don’t you should have enough pride not to become a ward of the state. Pelosi wants you to be just that.
Far be it from me to rain on your parade. If you think you have talent, whether it be in music or dance or painting or filmmaking, go for it. Just go for it on your own dime.