What conservatives can learn from the Oscars

I must admit that I was determined not to watch the Oscars this year. Like many of you, I had grown weary of awards shows that turned into Trump-bashing festivals. Traditionally, my wife and I have watched the Oscars from red carpet to Best Picture. She coaxed me into watching the red carpet broadcast with the promise that when it turned political we would turn it off. Next thing I knew, we were watching the opening number of the Oscars. 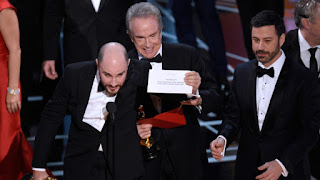 Jimmy Kimmel took heat from both sides for his role as host. Here’s the deal. If Kimmel did not make jokes about Donald Trump during the Oscars it would’ve been comedic malpractice. There hasn’t been this much comedy gold in a White House since Bill Clinton—maybe ever. Trump’s feud with Hollywood was ripe for the picking. And, for the most part, I thought Kimmel’s jokes were not only funny but fair.

The left went nuts when Kimmel held up the 8-year-old star of the movie of Lion, Sunny Pawar, like he was the Lion King. Little Sunny happens to be from India. They said it was somehow racist. And then there was the brilliant stunt where Kimmel lured a dozen unsuspecting tourists into the auditorium under the guise they were viewing past Oscar gowns. In a passing impromptu interview with on of the tourists named Yulerie he had a hard time understanding her name. “It rhymes with jewelry,” she explained. Kimmel asked what her boyfriend’s name was. He said, “Patrick.” Kimmel replied, “Now that’s a name.” To the hypersensitive-offend-me-with-everything-liberals, that was racist because she was Asian.

Mark Rylance, who won last year’s best supporting actor Oscar, seemed to scold the people losing their minds over Trump. “Opposition is really good in society,” he said before presenting the Oscar for best supporting actress. “Something women seem to be better at than men is opposing without hatred.”

Even the commercials seemed to be more unifying. Cadillac’s ad showed crowds of protestors dating back to the ‘60s and flashing forward to today. It then reminded us, “What doesn’t make the news is this: We carry each other forward—no matter who we are or what we believe.” It closes by saying, “While we’re not the same, we can be one. And all it takes is the willingness to dare.”

Aside from some foreigners who won and made snide remarks about the United States, the theme at this year’s Oscars seemed to be “Enough.” Enough with the hysterics. Enough with the hatred. Enough with the notion that if you disagree with me you must be evil. The behavior from the left, and specifically Hollywood, since Trump won leaves us longing for a time when we looked at one another and simply said, “You’re wrong.” That used to pass for division in this country. The people who profess to love everyone have taken hatred to a whole new level.

But it is incumbent upon those of us who point fingers not to fall into the same trap. We can’t flip the channel every time someone makes a joke at our expense. We can’t scream someone down just because they’re losing their minds at us. We can’t fail to see a good idea just because we didn’t think of it first. We can’t fuel the furnace of hatred with more hate.

As conservatives, we have to be very careful not to be so thin-skinned that we can’t laugh at ourselves. Otherwise, we become just like the hysterical snowflakes on the other side.