What’s up with all the missing children lately? We saw the report of the U.S. Marshals’s Operation Not Forgotten which rescued 26 children and safely located another 13. They also arrested 26 adults. More recently Operation Homecoming found 8 more children in Indiana. Over the last few weeks, U.S. Marshals have found 72 missing children. That, however, is just a fraction of the children who go missing each year.

The FBI’s National Crime Information Center says there were 421,394 missing children last year. Many are caught up in custody disputes 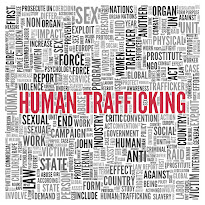 when one parent essentially kidnaps his or her own kids and goes on the run with them. Many of those children are never located. Too many children are kidnapped for the underground sex trade in this country. It’s unbelievable but true. Accurate numbers are hard to come by, but the State Department estimates between 15,000 and 50,000 women and girls are trafficked each year just in the United States.

When the story on Operation Not Forgotten broke and then was quickly pushed aside by political and COVID news, one of my sons asked me why this wasn’t the biggest story in the country. It’s hard to say why. I think part of the reason is it’s such an ugly story people tend to look away. We don’t want to think that child sex slaves are being traded right here in our country, but they are, and we need to start paying attention.

It’s not like the story is new. The U.S. Marshals have aided in the recovery of over 1,800 children since they first teamed up with the National Center for Missing and Exploited Children in 2005. There are some QAnon posts that attempt to make this look like something new and tie it to some Democrat-run sex ring, but there’s no evidence of that whatsoever. What there is evidence of is an ongoing problem of exploited children and a near blackout of the story by the media.

The problem lies in separating the parental disputes from the child sex trade. I, by no means, make excuses for parents who flee the state with their children, but at least we can get our minds around that. What is unfathomable is anyone who would sexually exploit a child. What’s even more despicable is it’s sometimes the parents themselves. U.S. Marshal Pete Elliott told WOIO-TV, “We’ve had some cases where the mother or father, or both, may have been prostituting their own child.” Can you imagine? Most of us can’t.

The fact that Operation Not Forgotten got so little press is an indication of our indifference. So many people like my own sons are much more outraged because they’re barely adults themselves. It’s easy for them to think, “that could’ve been me.” For the rest of us, we need to be thinking, “that could’ve been ours.” It’s only after we personalize this issue that it will ever go away.

We think of child sex trafficking as just a third world problem. It’s not. It’s our problem too.

Posted by Phil Valentine Show at 6:01 AM