This is no longer about George Floyd

George Floyd has almost become a footnote amid the chaos sweeping the country. It’s a shame, too, because I believe the man was murdered by a police officer in Minneapolis while other officers stood by and did nothing. Unfortunately for the legacy of Mr. Floyd, his unfortunate and tragic demise now pales in comparison to the carnage left in the wake of his death.

More people have now been killed in his name. Dave Underwood, a security officer for the Federal Protective Service, was killed by a mob in Oakland. Chris Beaty, a former IU football star known as ‘Mr. Indianapolis’ was killed trying to help someone get to safety. An unnamed 21-year-old was murdered while sitting in his car in Detroit. 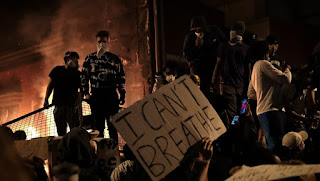 Several have been killed while looting stores. We won’t dignify them by mentioning their names here.


So, George Floyd wasn’t the only casualty, he was just the first. And who’s responsible for the carnage? A group called Antifa. It’s a loose confederation of communist/America-haters who organize locally but are supported nationally. Who’s funding them? That remains a mystery. Some think they know, but I won’t speculate here. What we do know is they’re being financially aided by some of Hollywood’s biggest names. Seth Rogan, Steve Carell, and Chrissy Teigen, among others, have all pledged money to bail the rioters out of jail. Slice it any way you like, but that means they are explicitly endorsing murder and violence.

Is there police brutality in America? Sure. I’ve been on the receiving end of it. Try restraining a police officer who’s busted into your beach rental and is trying to beat you over the head with a billy club. The officer was later fired from the force. Does he represent police officers in general? It would be real easy for me to fall into that trap, but I have better sense. I’ve known a lot of police officers in my day. The vast majority are good people who strive to do a great job protecting citizens like me. God only knows what this country would look like without policemen. That’s exactly what Antifa wants to see. Don’t believe me? Read their protest signs.

I’ve led many protests. We rallied on a regular basis to beat back the state income tax in Tennessee. With protests there are objectives. Ours was to defeat the tax. Each time the legislators went home without a vote we had won the day. We kept coming back until the tax was put to bed permanently. What was the objective of the protests over George Floyd? To see an arrest for his murder. We got it. Time to go home. They didn’t. That’s when the protests really turned violent.

In the midst of cities burning across America, Nashville’s mayor, John Cooper, had the bright idea to stage a protest of his own. It was ostensibly against white supremacy and police brutality. One has to wonder if you’re a police officer on the Nashville police force what the mayor thinks of you. Up until that point we had avoided the plight of so many cities in America. The mayor opened the door wide open, and then feigned outrage when Nashville was burned and looted. The honorable thing would’ve been to resign, but he doubled down, planning another rally, albeit a lower key prayer vigil. It was still meant to appease.

One of my sons commented that the mayor was like the cool parents who buy alcohol for their 16-year-old’s birthday party, then everybody gets drunk and the cops bust it. Well said.

Posted by Phil Valentine Show at 8:26 AM