All eyes are on China these days. The dreaded tariffs that the so-called experts told us would devastate our economy have yet to come true. Could those tariffs be part of a broader plan from President Trump? More on that in a moment. 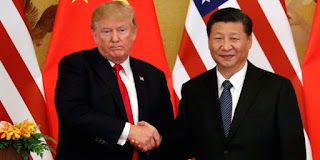 The consumer price index, which is, according to the Bureau of Labor Statistics, “a measure of the average change over time in the prices paid by urban consumers for a market basket of consumer goods and services,” is actually trending down. Lower energy costs are driving the overall number down, but take energy out of the equation and we’re still only running at 2.1 percent inflation. The latest numbers for June have us down to 1.6 percent for the month. In other words, a 25 percent tariff on 17.7 percent of the goods we’re buying has so far had no effect whatsoever.


If China is taking the hit for the tariffs how are they doing it. And why? First as to why. The communist Chinese government is a partner in every Chinese company. As those companies go, so goes China. They have a vested interest in keeping their products competitive on the American market. China is able to avoid a price increase in the United States by doing two things.

First they can devalue their own currency thus making the product cheaper in real dollars for American importers. They’ve been known to do this with regularity. Trump has always called them a currency manipulator. They were officially designated as such from 1992 to 1994. The U.S. Treasury department just officially designated China as a currency manipulator, confirming what President Trump has been saying.

The second way they stay competitive despite the U.S. tariffs is to lower the prices of their goods to importers in the United States. Let’s say you have an item that wholesales for $10. You slap a 25 percent tariff on that item and the importer has to jack up the price by $2.50. But what if China lowers that wholesale price to $8? The tariffs raise the price to $10 and the importer is right back where he was.

Lower prices and currency devaluing are very expensive. When China devalues its currency it may make their goods more attractive here, but it costs their consumers more to import goods from everywhere in the world. And they import a lot of goods.

This is where I think Trump has laid out a brilliant strategy. This is not something he would ever say publicly. I believe Trump’s ultimate goal with the tariffs is to bring the communists in China to their knees. Before you scoff remember that the so-called experts were telling us in 1988 that the Soviet Union would last a thousand years, that they were in much better shape economically than the U.S. A year later they were gone.

Could China be to Trump what the USSR was to Reagan?