The mainstream media are becoming so transparent in their agenda that it’s a wonder anyone believes anything they report anymore. But, unfortunately, they do. The majority of Americans now believe President Trump is a racist, according to a recent Quinnipiac poll, even without an ounce of proof. The New York Times leads the charge, and they have ever since a few months before the 2016 election when they stated in their pages that journalists could no longer simply report the news. They had to actively work to defeat Donald Trump. 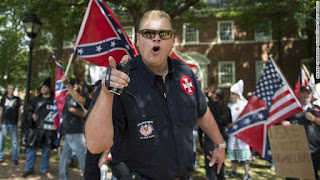 That obviously didn’t work, so they concocted this illusion that Trump had colluded with the Russians to steal the election. That fizzled as well. Now the Times is leading the charge to paint the president as a white supremacist. How do we know? Because someone leaked an audio recording of a meeting conducted by the Times’ executive editor, Dean Baquet. “We built our newsroom to cover one story [Russia collusion], and we did it truly well,” Baquet said. “Now we have to regroup, and shift resources and emphasis to take on a different story [Trump’s racism].”


Right on cue the rest of the mainstream media jumped into action. Now we’re seeing and hearing daily stories on how white nationalism is an epidemic and these white nationalists are taking their cues from Trump. MSNBC even had a former deputy director for counter intelligence at the FBI on to explain how Trump’s raising the flag to full staff after lowering it in respect for the shooting victims in El Paso and Dayton was a secret sign to the white supremacists. He said Trump was raising the flag on August 8. The number 8 means something special to the white supremacists. Eight means the letter ‘H’ which stands for Hitler. Raising the flag on 8/8, he said, means ‘Heil Hitler.’ You can’t make this stuff up!

Brett McGurk, senior foreign affairs analyst at MSNBC, claimed white nationalism was behind most domestic attacks since 9/11. I counted 81 mass killings since 2001. Three were racially motivated. And don’t forget the El Paso killer was an eco-terrorist who targeted Hispanics because he believed the influx of new people into the country was destroying the environment.

By the way, of those 81 mass killings, 9 were carried out by Islamic extremists. There were several more where fewer than 4 people were killed, the threshold for the FBI’s definition of a mass killing. What’s even more disturbing is to think that less than 1 percent of the population in America is Muslim. Nine mass murders by less than 1 percent of the population is huge.

Of course, Don Lemon at CNN says white males are the biggest terrorist threat to America. There’s no doubt that white men usually are behind mass shootings, but mass shootings are seldom acts of terrorism. What Lemon and others purposely ignore is that half the murders in this country are committed by black males. That’s a far bigger problem that I believe can be traced to our failed housing projects, as I’ve written here before.

Be forewarned that many of your news sources have gone rogue. Dispensing of information is no longer a service, it’s a weapon. Many of the trusted news outlets are on a mission to make sure Donald Trump is not re-elected in 2020. I wish it were not so, but it is.

In an age where information is literally at our fingertips any time we want it you’d think we’d be well-informed. Instead we’re misinformed, which is far worse even than being uninformed.