Trump is exactly right on Baltimore

The Democrats are quick to call anyone who shines a bright light on the problems they’ve created a racist. Too many Republican politicians are afraid to speak the truth for fear that the “racist” label will end their careers. President Trump has no such fear. If you’re not a racist then you have nothing to fear by highlighting the colossal failure of the welfare state.

This is an easy problem to solve. The reason Baltimore has the highest murder rate of any large city in America is because of public housing. We've warehoused the most desperate people of society in one place for one-stop shopping for the drug dealers, the pimps, and the gang leaders. Ask any cop in any city where the crime is and he/she will tell you, "The housing projects.” 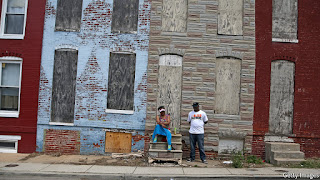 While the mainstream media were fixated on the shooting at the garlic festival in California they ignored the mass killing in Chicago. That same weekend 9 people were murdered, another 39 were wounded. It just wasn’t by one gunman. The sad part is the Chicago killings are no longer news. They happen with regularity, and they all have a common denominator. Public housing.


If you do a cross reference from the local CBS affiliate’s story in Chicago with a list of public housing from the Chicago Housing Authority you get the clear picture. Altgeld Gardens, Lawndale, East Garfield Park. These were some of the neighborhoods where the 9 murders occurred. These are also neighborhoods where the public housing projects are.

We can do better. And we need to start now.

It's time to tear them down and start from scratch. The welfare department should be transformed into a jobs match program. What's your skill? We have a job opening in Nebraska. But I don't want to leave Baltimore. Too bad. That’s where the job is. If we took that approach we’d separate the needy from the greedy and we would solve not only the poverty problem but the gun violence problem as well.

And don’t tell me it’s too much of a burden to ask someone to move. I left Greensboro, NC for Nashville, TN because there was no job for me in Greensboro. I had to eat. We should only be taking care of the those who can't take care of themselves. Everybody else? Out.

This is what you do for people you love. Got kids? Do you trap them in dependence by begging them to move back home, or do you help them make a life of their own? Same thing for everybody else in society. That is true compassion. Trapping people in Baltimore with a 50 percent unemployment rate is not only not compassionate, it's cruel.

It took Donald Trump to bring this reality to everyone's attention. We shouldn't trap people in a rat-infested neighborhood. Or, as Bernie Sanders called Baltimore, a third world country. Incidentally, Bernie got absolutely no flack for his characterization of Baltimore. He was right and so is Trump. And so is the former mayor of Baltimore, Catherine Pugh, who said in a local news feature last year, “You can smell the rats.” She added, “We should just take all this sh*t down.”