The mainstream media are fixated on President Trump’s tweets. Did he use the best choice of words? No, as is sometimes the case with this president. Was his point valid? Yes. His point was there are certain lawmakers who have a general disdain for this country. That’s the point that’s being ignored by the media as they try to paint his tweets as racist and xenophobic. The ‘xenophobic’ angle was obviously part of the Democrats’ talking points in the wake of the now-infamous tweets aimed at the ‘Squad.’ Nancy Pelosi and others screamed that these women are Americans. Then how could a tweet attacking them be xenophobic? One wonders if those hysterically screaming the accusation of xenophobia actually know what it means.

Let’s dig a little deeper into what precipitated the tweets from Trump. 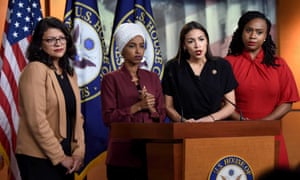 Alexandria Ocasio-Cortez took a well-publicized trip to the border. Either she was told, or she made it up out of thin air, that the Border Patrol was forcing women to drink from toilets. Now, common sense would tell you that’s not true. Her default assumption was that the United States was evil. The truth is these facilities were equipped with sink/toilet combinations. The sink’s at the top. The toilet’s at the bottom. These women were drinking from the sink, not the toilet.


Congressman Ilhan Omar has made many disparaging remarks about America. It’s obvious she’s no fan of Israel either. Is she antisemitic? You could certainly draw that conclusion. However, every criticism of Israel is not automatically antisemitic.

Jonathan Pollard was one of America’s most notorious traitors. He was caught passing top-secret classified information to a foreign country. What country was that? Israel. So let’s dispense with this nonsense that simply criticizing Israel makes you an antisemite. To do so deflates the real antisemitism that seems to surround Omar.

Do these women dislike the United States? America sure does seem to be their go-to whipping boy.

But here is the underlying point most everyone is missing. The comments coming from the ‘Squad’ are seen as anti-American, but America is not the real target. Capitalism is the target. We just happen to be the country that’s doing capitalism the best. These women believe our economic system is unfair and racist. They look at raw data and come to emotional conclusions.

They look at raw stats like black home ownership and black income as indicators that the United States is racist. Or, more specifically, that capitalism is racist. Under President Trump we’ve seen black unemployment hit its lowest level in history. Same for Hispanics. Employment is the quickest way to lift people from poverty.

You can throw all the money you want at poverty. And we have. About $15 trillion. The poverty rate is roughly where it was when we started. Socialism is not the answer. Capitalism is. Instead of throwing more money at the problem we should be creating opportunity by allowing the private sector to create jobs. That’s not a race issue. It’s a human dignity issue. Donald Trump is solving that problem. The Squad is trying to stop him.

Posted by Phil Valentine Show at 9:59 AM