Why they kill—The real solution to mass shootings

Everybody’s searching for answers in wake of the latest school shooting in Florida. The gun-grabbers not withstanding, I believe most people genuinely want to stop the shootings. We just have different ideas of how to get there. However, it’s becoming obvious that the debate is focused on the wrong thing.

Naturally, anytime there’s a shooting the emphasis is going to be on the gun. It’s funny how the object of the murder is never the issue when it’s not a gun. When there’s a stabbing, the target is never on the knife. When some crazy person runs people over in a vehicle, the focus is never on the vehicle. Let me demonstrate why the issue here should not be guns, then we’ll move on to the real problem. 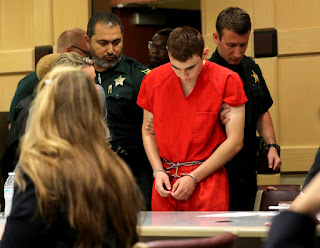 There are over 300 million guns in America. Whether or not you like that fact, it’s still a fact. There are about 30,000 gun deaths a year. That includes homicide and suicide. That means that 0.01 percent of guns are used for evil.

If you think the fact that America has more guns per capita than any country on Earth makes us the murder capital of the world, think again. Even though we have 101 guns for every 100 people (you read that correctly), we're only 99th for murders. Honduras has only about 6 guns per 100 people and they have the highest murder rate in the world.  Obviously, the problem is not the guns.

The path that led me to the epicenter of the problem is interesting. I knew all the facts that went into my epiphany. I had just never aligned them this way before. A friend of mine once joked on the radio while interviewing a hit songwriter that he knew all those words. Just not in that order. That’s sort of how I felt.

I don’t know if you know this, but back in 1975, the Supreme Court ruled that you could not be held in a mental institution against your will unless you were a danger to yourself or others. I had known that fact because it’s why the homeless population exploded in the ‘80s. The liberals blamed it on Reagan. Kenneth Donaldson sued his doctor and the mental hospital claiming he had been held against his will. He won.

I also knew that multiple victim shootings seemed to have exploded in the last couple of decades. I wanted to know when that acceleration began to see if I could draw any conclusions. Statisticians have an expression. “Correlation does not imply causation.” The homeless explosion is an example of that. Just because homelessness grew dramatically during the Reagan administration doesn’t mean Reagan had anything to do with it. However, correlation and causation are oftentimes related.

In order for this to be a fair comparison, I looked at the mass shootings in the 43 years prior to 1975 and the mass shootings in the 43 years after 1975, which would bring us up to 2018. I excluded gang killings for obvious reasons. I also excluded robberies and terrorist attacks. These aren’t motiveless crimes. This also doesn’t include U.S. territories nor does it include serial killers. We’re trying to figure out why crazies are randomly killing people in the United States of America.

People want to point to the breakdown of the family unit or increased use of psychotropic drugs. They could certainly be contributing factors. Especially when it comes to psychotropic drugs. One has to wonder if, in the absence of being able to commit someone to a mental hospital, we over-medicate them instead. That's certainly a possibility. Everyone involved in these multiple-victim shootings was mentally unstable. It's distinctly possible that they were also on medication. Whether it was the mental illness or the medication that caused them to become violent is the age-old chicken or egg question.

However, one would be hard-pressed to discount the Donaldson ruling in 1975 as a major turning point. There are simply too many dangerously mentally ill people roaming the streets. By the time they actually kill it's too late. That doesn't mean we need to start locking up anybody and everybody somebody deems crazy. However, in every one of these mass shootings there were danger signs in the killers that people simply chose to ignore. Or maybe they had no choice since our justice system now makes it extremely difficult to act. But act we must unless we want to continue the carnage.

Imagine if everyone who knew the Florida school killer was a threat had acted. Not only would 17 people still be alive but we could possibly help this disturbed person recover. Instead, we act as though it's someone else's problem. Until it becomes the nation's problem. Right now, mental competency hearings are usually held before someone goes on trial for murder. What a difference it would make if we had mental competency hearings before they kill. Can you imagine the Florida school shooter would've made it through a competency hearing and still been allowed to buy a gun based on all we know now?

Let's get the dangerously mentally ill off the streets before they kill. That is where our efforts should be concentrated.


Posted by Phil Valentine Show at 6:01 AM