The lessons of Parkland

Interesting, isn’t it, how the Parkland shooting remains in the headlines weeks after it happened and the Vegas shooting, which killed over 3 times as many people, faded away in days. What’s different about this shooting?

The obvious is there were children involved. The other X factor is the kids, specifically David Hogg, who have taken the spotlight to advocate for gun control. Pardon my cynicism but I think it’s unseemly for Hogg and others to exploit the deaths of their classmates to further their obvious political agenda against guns. And shame on CNN for ceaselessly manipulating their audience with these kids for their own political gain. 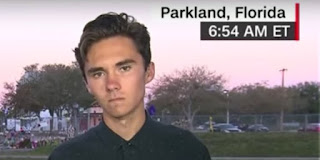 As demonstrated in this space before, with a small fraction of one percent of the guns being used for evil, obviously the guns are not the problem. Crazy is the problem, and I applaud President Trump for having the courage to broach that subject when he suggested that we need more mental hospitals and more of these disturbed people in them. But solving that problem is a steep climb given the Supreme Court ruling and the large advocacy on the left for keeping these disturbed people on the street. Someone even told me there are brochures for the mentally ill to instruct them on how to find edible food in dumpsters. Don’t you think people dumpster diving would be better served in a mental institution that can tend to their daily needs and help them get well?


Given that we’re unlikely to win that battle anytime soon it is incumbent upon us to do what we can to save children’s lives. I’ve long advocated for a Designated Defender program in schools. Now we have a president with the guts to put that idea front and center. Meanwhile ‘Camera’ Hogg and his cohorts continue to blame Republicans. He actually said that Governor Rick Scott, the Republican governor of Florida, was responsible for the cowardly deputy who refused to enter the school and confront the shooter. No mention of Sheriff Israel because the good sheriff shares his views on gun grabbing.

These kids have now pressured companies like Delta and United along with practically every car rental company to sever ties with the NRA. What in the world does the NRA have to do with the shooting in Florida. It’s akin to blaming AAA for drunken driving deaths.

It’s time for good people to fight back. Google the list of companies that have cowardly bowed to the demands of the leftist gun grabbers and let them know how you feel.

Look, I have all the sympathy in the world for anyone who’s lived through the horror of a mass shooting, but that doesn’t make you an instant expert on guns or how to solve gun violence. The truth is the people on the ground in Parkland, Florida are largely to blame for this shooting. The sheriff’s department visited the killer’s home multiple times. The school didn’t want to report his criminal behavior at school for fear of blemishing their record. Nearly every student interviewed who knew this guy said they thought he was dangerous and would end up killing people. Did they say anything before he went on his rampage?

There are plenty of lessons to be learned from Parkland. We have to evaluate mentally ill people before they become dangerous. That is the primary lesson we should learn. We should also learn not to be complacent. See something, say something. Law enforcement needs to start connecting the dots. And the FBI needs to get off Russia and the NCAA and start protecting our kids.