Sometimes it’s difficult to recognize history when you’re living it. Make no mistake, we’re living through historic times and Donald Trump is the reason. Whether or not he wins the nomination, this campaign season will be remembered for one refrain: We’re going to build a wall and we’re going to get Mexico to pay for it. 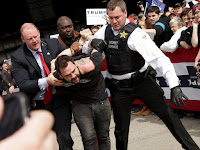 This simple idea seems to elude the party elites and talking heads on television. They’re still scratching their heads trying to figure out why Donald Trump became the phenomenon he is. It’s not hard to figure out if you have your finger on the pulse of the people. Quite simply, they’re fed up with illegal aliens and Washington’s apparent lack of desire to do anything about it.

But the illegal aliens have become emblematic of another movement that has been festering beneath the surface and Trump has brought them out of the woodwork. It’s more than just the Bernie Sanders crowd, a phenom in and of itself. What’s shaping up is an epic showdown between what Ayn Rand called the looters and moochers in her classic novel, Atlas Shrugged — I call them the loochers — and the producers on the other side.

Say what you will about Trump, he’s a producer. The barbarians at the gate are the scads of entitlement-class brats who don’t produce anything but a burden and demand someone else bear the cost of it. They want free college, free healthcare, living wages, and the like, having no clue that nothing is free except to the looters and moochers who take it by force of law.

The cancelled Trump rally in Chicago will be looked back upon by historians as a turning point in this long overdue battle between the producers and the loochers. We hear ad nauseam about income inequality, but what does that even mean? To those who shout it, it means some people have more than they do and they aim to take it from them.

The loochers have taken many forms before. They were Occupy Wall Street. They were MoveOn.org. They are Black Lives Matter. These people suppose that destroying a political rally and keeping the candidate from speaking is somehow an exercise of their own free speech. It isn’t. It’s anarchy. I’ve often said that the left is all about diversity except when it comes to diversity of thought. It’s not enough to just ignore an opinion counter to their own. They have to shut it down. That’s the textbook definition of fascism.

Every revolution has its turning point, a moment by which the battle lines are drawn and from which the status quo will never return. For the American Revolution it was the Boston Massacre. For this current revolution it was Chicago. This revolution, however, is not the cause of the anarchist and loochers. It’s the moment the producers decided they’d had enough. When Ted Cruz, Marco Rubio, and John Kasich should have recognized the turning point for what it was and stand with the producers, they saw it as a political opportunity and, thus, lost their place in its history.

They shall only be remembered as cannon fodder in this battle between those who keep our economy moving and those who attempt to rape it. An unlikely, braggadocious narcissist managed to tap into the anger that was created by a political party that took the producers for granted and existed only to perpetuate its own existence.


Whether Trump ever makes it to the White House remains to be seen. What is indisputable is that he has put a match to a raging bonfire.