I always hated that guy who came back after the fact and said, “I told you so,” but, um, I told you so. When every pundit had left Joe Biden for politically dead I said, “Wait for South Carolina.” Even as we approached South Carolina some pundits were claiming Bernie Sanders would win. I explained to you several weeks ago that Iowa and New Hampshire don’t matter. They matter less each passing election. Why either party stakes so much on them is a curiosity. I think that will change in 2024.Now what? 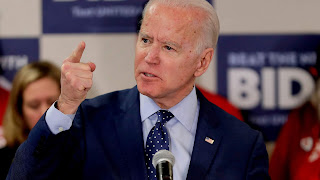 Well, Joe won big on Super Tuesday (or Super Thursday as he preferred to call it) and that’s because of his performance in South Carolina. Now, I don’t profess to have any inside knowledge of the Democrat machinery. At the risk of getting a “Go to hell!” from Donna Brazile, I’ll do a little speculating on the backroom workings of the DNC. I suspect they wanted Pete Buttigieg. He’s young, he’s smart, he’s gay. The perfect progressive. He’d just won Iowa (supposedly) and looked like the fresh face in comparison to the Jurassic bark of the old “get off my lawn” candidates on the debate stage. I expected one of them to randomly shout out “Bingo!” at any moment. The DNC elders looked at South Carolina as the litmus test. If Pete could miraculously pull out a win there then he’d be their man. If he couldn’t he’d have to step aside for the good of the party.


Then Joe Biden ran away with it in South Carolina, raking in almost half the vote. At that point it was clear that he was the only one who could beat Bernie. And the last thing the DNC wants is Bernie as their nominee. It goes far beyond the fact that Trump would mop the floor with him. The DNC establishment knows that a Bernie nomination would effectively relegate the Democrats to third-party status. This is the interesting part. It’s not that they don’t agree with him. Many in the DNC are just as socialist as he is. They just don’t say it out loud. It’s like pooping. Everybody does it, but, egads, you never discuss it in polite company.It’s all about winning. Both parties have that mentality to a certain degree, but the Democrats seem to place it above all else. They would love to see the economy tank so that it hurts Trump. Heck, they’d love to see the coronavirus become a crisis in America if it hurts Trump. I’ve never seen a group of people like this in my life who place party before country. If you think I’m being unfair look at the impeachment. Look at the two-year-long Trump/Russia hoax. Heck, Donna Brazile was on TV on Super Tuesday claiming the RNC chairman was using “Russian talking points” before she told her to “go to hell” for speculating on what the DNC was up to.What is the DNC up to? They’re devising a strategy to win. Even if it means elevating a guy as the party’s standard-bearer who looks like they found him on a beach with sandals and tube socks and a metal detector. When Donald Trump is the youngest man in the race alarm bells should be going off.Mayor Pete’s smart. He knows he had no chance of getting the nomination. He has a much better chance of being president if he’s on the ticket with Biden. When Biden loses he’s positioned for 2024. If the economy keeps booming that may be a moot point.