Obscuring the truth in the IG report

The long-awaited Inspector General’s report from the Department of Justice was finally released. Inside were accounts of 51 violations and 9 false statements by the FBI. What were the headlines from the coup-complicit mainstream media? “FBI was justified in opening probe,” said the Washington Post. “Russia Inquiry Report Finds Mistakes but No Anti-Trump Plot,” headlined the New York Times. CNN crowed, “Start of FBI Russia probe was justified and unbiased.”

But what’s the real story? 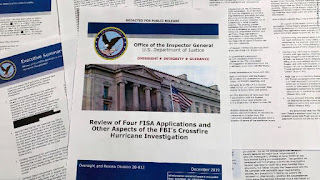 We already know about the toxic text messages floating back and forth between the adulterous FBI lovers, Peter Strzok and Lisa Page. Both were highly involved in the Trump probe. Strzok led that investigation. Their bias is obvious, yet it was explained away by the IG report as not relevant because “while Strzok was directly involved in the decisions to open Crossfire Hurricane (codename for the Trump investigation) and the four individual cases, he was not the sole, or even the highest-level, decision maker as to any of those matters.”


In other words, it doesn’t matter that those investigating were dirty cops, they weren’t making the ultimate decisions. Yes, but they were feeding information to the decision makers. And the one clear case of bias within the FBI has been totally ignored by the mainstream media.

Kevin Clinesmith, an attorney involved in the Trump investigation, was referred to the Department of Justice for prosecution after he was alleged to have altered an e-mail regarding Trump aide Carter Page in an effort to continue a FISA warrant on him. This was an obvious and successful attempt to spy on the Trump campaign by a clearly partisan operative. Think he wasn’t partisan? The IG report chronicles some of his text messages. The day after the 2016 election he wrote, “I just can’t imagine the systematic disassembly of the progress we made over the last 8 years. ACA (Obamacare) is gone. Who knows if the rhetoric about deporting people, walls, and crap is true. I honestly feel like there is going to be a lot more gun issues, too, the crazies won finally. This is the tea party on steroids. We have to fight this again.”

Not bad enough? How about this?

Two weeks after the election another FBI colleague checked in with him to see if he’d had a change of heart about Trump. “Hell no,” he wrote. “Viva le resistance,” And resist he did. He didn’t alter the Carter Page e-mail until June of 2017.

Oh, that’s not biased at all. (Where’s my sarcasm emoji when I need it?) Michael Horowitz, the Inspector General, will tell you that those types of messages don’t matter because Clinesmith wasn’t a decision maker. That flies in the face of common sense. If people who are working a case are biased then the information they send their superiors will be biased.

And two people high up in the investigation having an affair? Remember what Ross Perot said about adultery? “If your wife can’t trust you neither can I.”

Fortunately Horowitz is not the final word on this. Attorney General Bill Barr and his chief investigator, U.S. Attorney John Durham, are ordinarily tight-lipped about their investigation into the origins of the Trump/Russia hoax. They both came out blasting the conclusion that there was no bias in the FBI. Not only did they believe there was “clear abuse of the FISA process,” as Barr put it, they believe the FBI actually uncovered exculpatory evidence and hid it.

The IG report is not the end, as the mainstream media hope. It’s just the beginning.