The moral rot of the left is now undeniable

If you want to know how deep the moral rot is on the left in America you need look no further than the Born Alive Abortion Survivors Act. The bill would do just what its name says. It protects babies that are born alive during a botched abortion and gives them the same consideration of life that any other human being is given. But all but three Democrats in the Senate voted against this bill, keeping it from reaching that magic number of 60 votes to pass.

We got a glimpse into the heart of the American left recently when the state of New York passed a bill allowing abortions up to and including the day of delivery. A bishop from Tyler, Texas described the jubilant signing ceremony with Governor Cuomo as “the chattering of demons.” 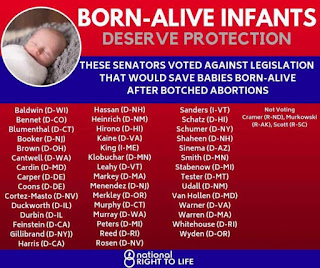 It was right after that that Governor Northam of Virginia pushed to modify that state’s abortion law to allow third trimester abortions if the mother’s mental or physical health is threatened as determined by just one doctor instead of the three required now. The bill’s sponsor acknowledged that it would technically allow abortion up until the point of birth. The “mental health” provision could be interpreted by a doctor as practically anything, including the mother just wasn’t emotionally equipped to take care of a baby.

Northam, who supported the bill, was asked what would happen to a baby who was born after a failed attempt to abort. “The infant would be resuscitated, if that’s what the mother and the family desired, and then a discussion would ensue between the physicians and the mother.”

Wait a minute. The baby would be resuscitated if that’s what the mother wanted? So, if she didn’t want the baby she could have it killed? And if it was resuscitated then the mother and doctor would decide if they would kill it?

This is why the Senate bill was needed, and the Democrats killed it.

But the blame is not just on the 44 Democrats who voted against it. It’s also on Mitch McConnell and the Republicans who allow this ridiculous charade called the filibuster to continue.

CBS News blatantly lied to the readers of its website in 2017 by saying of the 60-vote rule “that that’s what the Founders intended.” Nothing could be further from the truth. The truth is the filibuster and its 60-vote rule came about by accident when presiding officer Vice President Aaron Burr pushed to eliminate the ‘previous question motion’ arguing that it was redundant. The Senate voted to eliminate the previous question rule and unwittingly left a void in terminating debate. It wasn’t until 1837 that the first filibuster was actually used, some 50 years after the first U.S. Senate.

The truth is the Founding Fathers intended for bills to pass with a simple majority. The only things they required a super majority for were issues like impeachment convictions, overriding presidential vetoes, and ratifying treaties. They never envisioned the minority party holding Washington hostage with the 60-vote rule. It should never have come into existence and it should be eliminated immediately, yet Mitch McConnell is too spineless to push for it.

These days a filibuster is not even required. Used to be a senator had to hold the floor in order to gum up the works. Nowadays the lazy bums just have to threaten a filibuster and the 60-vote rule is invoked.

The House once allowed the idiotic filibuster but wisely chose to eliminate it long ago. It’s time the Senate does the same, before another innocent child dies.
Phil Valentine is the host of the award-winning talk radio show, The Phil Valentine Show. He's also the co-host of The PodGOATs podcast.