The liberals ignore the truth about tax cuts

My wife called me at work not long after President Trump signed the Republican tax bill into law. She asked me if we would be getting a tax cut or a tax hike. It was an interesting question, and one for which I did not have an answer. There are myriad tax calculators that have popped up since the tax bill debate began. I hadn’t used any of them. 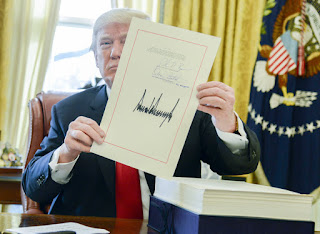 I’m not faulting you if you have. It’s only natural to be curious about how such a massive overhaul will affect you. The question is does that determine your support or opposition to the new law? It shouldn’t.

There’s a fundamental question that needs to be asked. Does our tax system maximize our economy, or is it a drag on economic prosperity? How it affects each of us personally is inconsequential. The answer to that question is this tax law goes a long way in stimulating an economy that has been, until Trump won the presidential election, sluggish. The stimulation since the election has been running on anticipation. That anticipation only takes an economy so far until hope turns to disappointment and the economy falters again.

Now the economy has something concrete to believe in. Companies like AT&T and Comcast immediately announced rank-and-file end-of-the-year bonuses. Other companies launched plans for massive expansion and infusion of cash into the economy.

Try as they may to pit all classes against the rich, marketwatch.com posted graphs that told the true story. The people who would be paying the largest percentage of tax hikes were those making more than $1 million per year. The vast majority of taxpayers, even the rich, would get a tax cut.

Of course, it’s the rich on whom the liberals always concentrate. What these same liberals don’t tell you is the rich pay most of the taxes. They lament the fact that those making $20,000 or less get the smallest tax cut. Most of those people don’t pay taxes at all anyway. Hard to give someone a tax break when they don’t pay taxes.

What really grinds the gears of the leftists is the corporate tax reduction. That corporate tax is cut from 35 percent to 21 percent. They drone on about the “rich corporations” like they’re some individual fat cat who’s going to skate. Taxes are simply another business expense to a corporation. Cut taxes and you cut expenses. Cut expenses and chances are you’ll see prices go down. Liberals seem to understand this concept when it comes to gasoline costs. They talk about how higher prices at the pump will translate into higher prices at the grocery store. The same principle applies to the high cost of taxes.

But let’s assume the liberals are right and these evil corporations will simply take that tax break and give it to their rich CEOs. Those CEOs will pay taxes on that money at a rate of 37 percent in addition to the corporate rate of 21 percent. Liberals should be happy, but, as we know, they seldom are. And as we’ve seen, corporations are already passing along the windfall to their employees and reinvesting in the company. That should convert even the most ardent skeptic. Only those who are purely political can witness that and remain unswayed.


How does the new GOP tax law affect you personally? Whether you get a direct tax cut or not is inconsequential. What matters is a rising tide lifts all boats. No matter what floats your boat politically this tax cut will be good for us all.