Media use Charlottesville to get Trump

President Donald Trump was widely criticized for condemning the hatred and bigotry in Charlottesville “on many sides.” Turns out he was right.

Before we get into the details, let me say without hesitation that I find the KKK, Nazis, and white supremacists repugnant. What one of them did by driving his car into a crowd of protestors is beyond horrible and he should be punished severely for it. 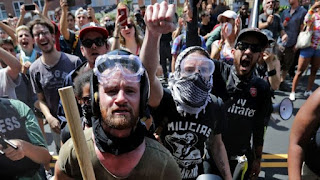 But that sentiment really goes without saying. Criticizing the president for not calling out the Nazis and Klan by name simply misses the point of the bigger problem that Trump did point out. What happened in Charlottesville was the clash of the idiots. I told my radio audience it was the Antifa (An-TEE-fuh) against the Noteefa. A bunch of redneck klansmen decided to march in Charlottesville. Why they marched has been widely overlooked.


There’s a movement that has gained steam over the last few years to whitewash history by removing any and all monuments to the Confederacy. That’s a mistake. No matter which side you’re on, it's a dangerous thing to erase history. Think what you will about the Civil War or the War Between the States or whatever you prefer to call it, there’s one thing that’s immutable. It happened. It’s also instructive to remember that it happened. Removing statues and monuments is not remembering. It’s trying to forget.

I’ve got a neat little policy that has served me well all my years. If there’s something that I don’t like, I stay away from it. I don’t try to tear it down. If that’s where we’re heading then we have a lot of work ahead of us.

There’s a bust of Margaret Sanger at the National Portrait Gallery. Sanger was an advocate of eugenics. In 1921 she wrote, “the most urgent problem today is how to limit and discourage the over-fertility of the mentally and physically defective.” Some say that was code for blacks. Even if it wasn’t, her call for limiting procreation based on her subjective definition of worthy mental or physical capacity is disturbing. The Nazis later used eugenics with chilling precision. Sanger is the founder of Planned Parenthood, not something I would be particularly proud of. As an advocate of genetic cleansing is her bust worthy of display at the National Portrait Gallery? I’ll choose not to visit it the next time I’m in Washington.

And does Martin Luther King’s serial infidelity and flirtation with communism overshadow his work as a civil rights leader? I don’t think so, but under the logic of the radical left he would be disqualified for memorialization. That is if the left actually found adultery and communism objectionable.

If one goes back and reviews the video from Charlottesville one will learn that the Antifa attacked the Nazis and Klansmen as they were marching down the street. Doesn’t excuse the running over of a protestor, but it does add credence to Trump’s call for the end of hatred and bigotry “on many sides.”

And let’s not elevate these Nazis to the intellectual level of the Third Reich. Most of these folks have the IQ of a soap dish. They couldn’t take over their own trailer park.

The media like to talk about “bringing the temperature down.” Rather ironic when they’re taking a blow torch to the situation in order to score points against Donald Trump.