Healthcare: Either you believe in the free market or you don't

Have you ever walked into a room, stopped, then thought, ‘What did I come in here for?’ That’s our Republican-controlled Congress. It’s like they can’t remember why they’re there. Let me give them a gentle reminder. REPEAL OBAMACARE!

Very few people in Congress understand how they got control of the House and the Senate. Sen. Rand Paul is one who does. His steadfastness against McConnell’s ‘Obamacare Lite’ bill helped seal its fate. It backed the Republicans into the uncomfortable corner of considering the only option they had left: Complete repeal. 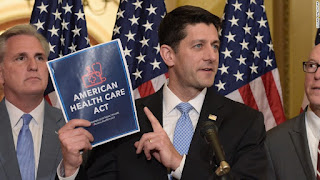 How many times did the House and Senate vote to repeal Obamacare while Obama was in office? I always called those ‘show votes’ because they were for constituent consumption, not real policy. Each time they had a chance to actually defund Obamacare they punted. With few exceptions, like Senators Rand Paul, Mike Lee, and Ted Cruz, the RINOs in the Senate went along with the Democrats in fully funding the one program that ultimately gave them absolute control in Washington.

And when they got that absolute control, what did they do? They cowered behind the law like it was an immovable monolith at Stonehenge. After all those ‘show votes,’ they couldn’t bring themselves to actually vote on repeal when it counted. So they set about crafting their own government-run healthcare program. Sure, it was light years better than Obamacare, but it was still government-run healthcare. As Rand Paul pointed out, it was a big bailout for the insurance companies.

Now, I’ll be the first to admit that we need lots of competition in the insurance industry. The last thing we need is for all of them to go away save one. That, I’m convinced, was the core objective of Obamacare. Single-payer healthcare. But we don’t need to be subsidizing insurance companies either. What we need is an unadulterated free market when it comes to health care and health insurance.

So-called believers in the free market put their faith to the test when it comes to healthcare. Either you believe in the free market or you don’t. In other words, either you believe competition will lower the cost of health care and health insurance or you don’t. If you’re satisfied with either Obamacare or the lame replacements put forth by the Republicans in the House and Senate, you don’t.

Reconnect the patient with the product and you’ll see health care costs go down. Make people pay for everyday things like a doctors visits or prescription drugs and competition will drive prices down. Save health insurance for the big stuff.