Words you can no longer say on campus

If you’ve visited the campus of the University of Michigan lately you may have noticed a poster campaign. It’s called the “Inclusive Language Campaign” and it’s anything but. It’s a crusade to ban language the PC police have deemed offensive. Some you can understand like “fag” or “retarded” or “raghead.” But that’s the problem with people who are offended. Once they get started there’s no end to their intolerance. 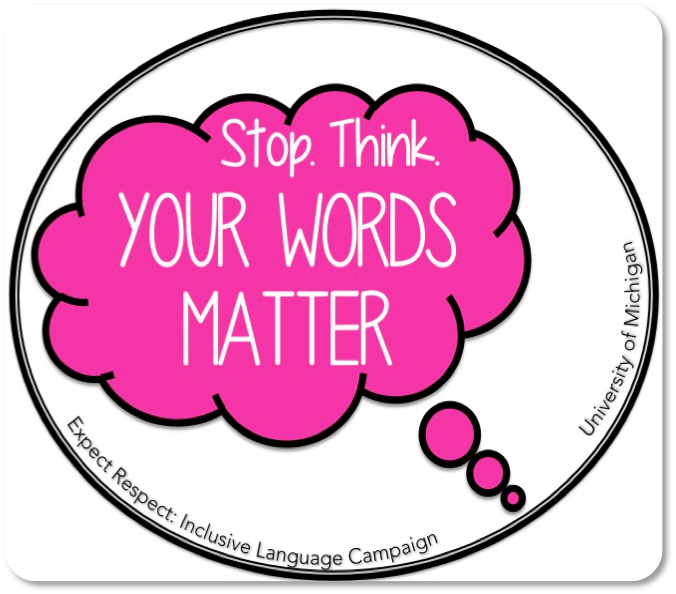 Another word they want to ban is “gypped.” Must’ve gotten complaints from the extensive gypsy population at Michigan. Here’s a head-scratcher: “ghetto.” They ask, “If you knew that I grew up in poverty, would you still call things ‘ghetto’?” Probably. Especially if I knew it hacked you off.

“Illegal alien” is verboten even though that’s what someone who broke into the country is. Don’t confuse them with the facts. They’re on a roll. Like banning the words “crazy” and “insane.” No doubt it would offend the crazy people who came up with this insane idea.

Ever been in a painfully embarrassing situation and said, “And I just wanted to die?” Don’t. According to these idiots “these words carelessly diminish the experience of people who have attempted or committed suicide.” Not that I want to pile on someone who’s tried to off themselves but are we supposed to give them a medal?

It doesn’t stop with just a simple campaign to control language. Students who live on campus are “urged” to take part in a workshop called “Change It Up!” Just think of it as a mini-re-education camp. They say the purpose is to build a “safe, inclusive, and respectful” community but it’s really just about control.

Of course, this is not just some student-led initiative. The University of Michigan is all in on this nonsense. A university spokesman told TheCollegeFix.com that the program is designed to “encourage individuals to commit to creating a positive campus community.” Sounds rather pansified to me. (I’m sure that would get me flogged by the campus PC police.)

You wanna hear just how nutty these people are? They don’t want you to say “work the kinks out.” Why? They say it’s rooted in racism because it refers to kinky hair. Actually, “working the kinks out” refers to a wire or hose, usually a garden hose. You straighten it out so that it works properly. It has nothing to do with hair. I can speak for all Curly-Americans that this is not offensive in the least.

They say that “who’d you sleep with to get that job” is offensive because it belittles anyone who’s ever been sexually harassed. You think I’m kidding. I wish I were kidding.

You can’t refer to the Asian guy as “that Asian guy” because “that guy is more than his race.” Well, no kidding, you thin-skinned weenie. Nobody’s saying he isn’t. It’s just a way of clarifying that you’re not talking about “that black guy” or “that white guy.” At least I didn’t call him “oriental.” Those rugs must be victims of some serious racism.

You can’t ask anyone “can you teach me how to twerk?” because “people of privilege consume, appropriate, and reject the culture of minority communities at their convenience when it’s trendy.” That’s just so stupid it doesn’t even deserve a response.

This is the product of a hypersensitive group of people who are in for a very rough life. Words hurt because you allow them to hurt. Once you reveal your weakness there are those who will mercilessly take advantage of it. Not saying that’s necessarily right, it’s just a fact.